Venera 3, a Soviet unmanned space probe, was launched in 1965. It crash landed on the surface of Venus on March 1, 1966. It was the first man-made object to travel to another planet.  Children could figure out how many days it took to get to Venus and the distance it traveled. They could make various math problems from those statistics.

Flag of The Gambia

The Gambia celebrates Independence Day. It gained its independence from Great Britain in 1965. Banjul is the capital of this small country, located on the northwestern coast of Africa. According to the CIA World Factbook, The Gambia is about twice the size of Delaware. Almost two million people live in The Gambia, and about 75 percent of its inhabitants are farmers. Children could learn more at: The Gambia.

Aleksei Leonov, a Soviet cosmonaut, became the first person to walk in space in 1965. His space walk lasted a bit over twelve minutes, and he was connected to his space craft by a tether.

Civil Rights March started in Selma, Alabama, reached the destination of Montgomery, Alabama, in 1965. Civil Rights marchers, led by Martin Luther King, Jr. began their journey on March 21. They camped overnight on three occasions, and the number of marchers swelled to 25,000. Two unsuccessful marches predated this march. President Johnson had to bring in soldiers and the National Guard to protect the marchers. Outcomes of the march included the 1965 Voting Rights Act and the voting registration of Blacks in unprecedented numbers. The road that the marchers used is now a National Historic Trail. Children could view a map of the march and learn more at: Civil Rights March. 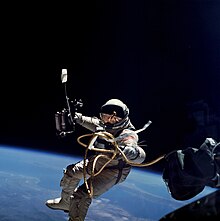 Major Edward H. White conducted the first American walk in space in 1965. White and his fellow astronaut, Major James McDivitt, orbited earth 66 times in Gemini 4. White’s walk lasted about twenty minutes. He was tethered to the space capsule, and he used a maneuvering device in his right hand to take him where he needed to be. Children could learn more at: Space Walk.

Early Bird satellite (Intelsat I) in 1965 made telephone calls from the United States to Europe more practical. Idea: Children could find out how calls were made before the satellite and how the satellite worked. They could also learn more at: Early Bird.

Maldives celebrate Independence Day. Great Britain gave up control of the coral islands in 1965. About 1,200 islands make up this country located in the Indian Ocean. In total the area of the islands is about 1.7 times the area of the Washington, DC. Almost 400,000 people live there, and many derive their income from the tourist industry. Male is the capital. Children could learn more at: Maldives.

Cook Islands celebrate Constitution Day. In 1965 the populace approved a constitution that gives them autonomy in free association with New Zealand. The area of the fifteen islands is about 1.3 times the size of Washington, DC. The northern islands are coral atolls, and the southern islands are vestiges of volcanic activity. About 10,500 people live there, mostly on the southern islands. The capital is Avarua. The islands are named after Captain James Cook, who saw one of the islands in 1793. Children could learn more at: Cook Islands.

Singapore celebrates National Day. In 1965 Singapore gained its freedom from the Malaysian Federation. According to the CIA World Factbook, Singapore is about 3.5 times the size of Washington, DC. It has a tropical climate, and over five million people live there. Children can learn more at: Singapore.