Pied Piper of Hamelin, according to legend, piped the rats out of the town and into the river in 1376. When the townspeople refused to pay him, he piped the children out of town as well. The children were never seen again. Many versions of the legend exist, but children could read one of the best, written by Robert Browning and illustrated by Kate Greenaway, at: Pied Piper.

John White and 150 colonists arrived in Roanoke Colony in 1587. They were to join some men who had previously settled there. However, Roanoke was deserted. The group stayed, but John White returned to Great Britain later in the year for more people and supplies. War with Spain kept him in England, and White did not reach Roanoke until August 18, 1590. No colonists were there, and the area became known as the “Lost Colony.” Children could learn more at: Roanoke Colony. 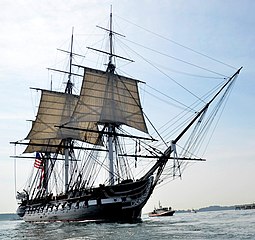 USS Constitution began its maiden voyage in 1798. Nicknamed Old Ironsides, the three-masted, wooden ship was named by President George Washington. She was most active in the War of 1812, and in 1907 she became a museum. Today she is the world’s oldest active vessel. Berthed in the Charlestown Naval Yard in Boston, Massachusetts, she sports a crew of 60 and provides historical perspectives and tours for visitors. Children can learn more at: USS Constitution.

Wiley Post in 1933 became the first person to fly solo around the world. He traveled 15,596 miles, and his voyage in the Winnie Mae lasted 7 days, 18 hours, 49 minutes. About 50,000 people welcomed his return to the Floyd Bennett Field in New York. He received a ticker tape parade in New York City. Children could learn more at: Solo Flight.

S. E. Hinton (born Tulsa, Oklahoma, 1948) writes books for children and young adults. One of her books is The Outsiders. She received the 1988 Margaret A. Edwards Award for her first five young adult books. Young adults can visit her website at: S. E. Hinton.

Gregor Mendel (born Heinzendorf, Austria, 1822; died Brunn, Austria, January 6, 1884) was a monk who pioneered work in genetics. In 1856 he started experiments with pea plants in the monastery vegetable garden. He continued breeding and crossbreeding the plants for a number of years. He kept notes. His work was not seen until after his death. Older children can read about his experiments at: Mendel.

Reverend William Archibald Spooner (born London, England, 1844; died Oxford, England, August 29, 1930) frequently confused parts of words. These led to spoonerisms. For example, he might say “pony pest card,” instead of “penny post card.” Idea: Children could make up their own spoonerisms. Children could visit a website at: Spooner.