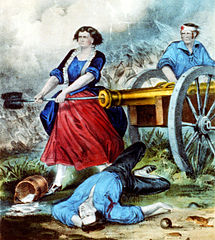 Early Bird satellite (Intelsat I) in 1965 made telephone calls from the United States to Europe more practical. Idea: Children could find out how calls were made before the satellite and how the satellite worked. They could also learn more at: Early Bird.

Maria Goeppert Mayer (born Kattowitz, Germany, 1906; died San Diego, California, February 20, 1972) was part of the Manhattan Project team. She experimented with the separation of uranium isotopes. She became the first American woman to receive the Nobel Prize in physics when she shared it with J. Hans Daniel Jensen and Eugene Wigner in 1963. Children could learn more at: Maria Goeppert Mayer.

Peter Paul Rubens (born Siegen, Westphalia, 1577; died Antwerp, Belgium, May 30, 1640) was an artist and a diplomat. By age 21 he had earned the status of master painter. He was also prolific in several languages. He became so busy that his shop was similar to a production line. He made the original sketches. His apprentices filled in the work. He came along and completed the details. Children could view some of his works at: Rubens. Idea: Students could look at some of his works. They could try his assembly line approach.