William Shakespeare’s birthday may be today! Experts believe he was born in Stratford-on-Avon, England, in 1564, and died in Stratford-on-Avon, England, on April 23, 1616. He is one of the most famous poets and playwrights. His works are among the most quoted in the World. He wrote almost forty plays and over 150 sonnets. Famous works include Romeo and Juliet and Macbeth. Children can read many of his works at: Project Gutenberg.

Boston Latin School opened its doors in 1635, making it the first public school to operate in the colonies. The school continues to exist! 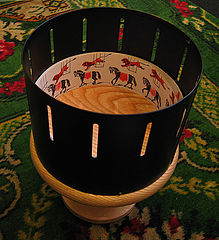 Zoetrope was patented by William Lincoln in 1867. He received Patent Number 64,117. A zoetrope produces the illusion of a moving picture by creating two cylinders, one inside the other. The outer cylinder contains paintings. The inner cylinder has slits in its side. When the inner cylinder turns, observers see the images on the outer cylinder move. Quite popular in the 1880’s, zoetropes have found new homes in long subway station platforms. Children could see an amazing Pixar video of a zoetrope at: Zoetrope.

Top quark was discovered in 1994. This was the last of the six subatomic particles to be found. The other quarks are the bottom quark, strange quark, charm quark, up quark, and down quark. Combinations of these quarks form protons and neutrons. Children could learn more at: Quarks.

Shirley Temple Black (born Santa Monica, California, 1928; died Woodside, California, February 10, 2014) starred in approximately 40 movies as a child and served as an ambassador as an adult. Two of her movies were Little Miss Marker and The Little Colonel.